As if from the very heart of an Anchorage Falls Manufactory comes Counters & Markers for First Law: Override by Counter Attack Bases.

Over the past week we have been in discussion with Counter Attack about producing these Counters & Markers to our rather demanding specifications. We required all items to be certain sizes, in certain colours, quantities and materials, and I really think that they have delivered as they turned up first thing Saturday! 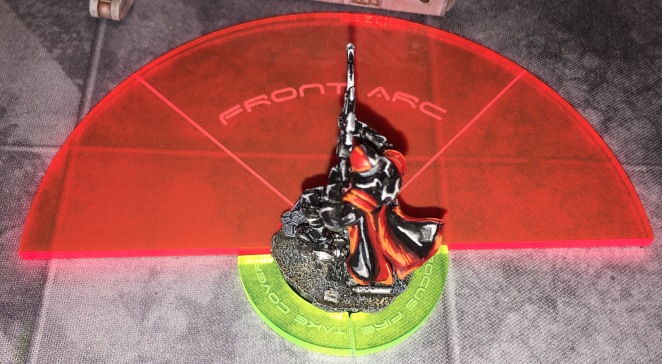 To begin with we have the FoV Arc. For those familiar with Override, you will know that the facing of a model is extremely important. You can only fire within your forward arc and anything in your rear arc will provide bonuses to enemy melee attackers.

With the use of the FoV Arc a player can see at a quick glance where these different angles are in relation to their models.

In the same picture you will find the Focus Fire and Take Cover Quadrant Markers.

Because Override places certain states on your models we really wanted a quick and easy way of tracking this. We experimented with using the Force Roster, which while working did prove unwieldy. As you can see this Raider with Sniper Rifle has taken cover, focuses his fire and is ready to gun down anything within his forward arc.

Which brings us onto our next unit; a Red Claw Kratel complete with two handed melee weapon.

This warrior is ready for action and has just used the Sprint Action giving him the Hard To Hit State, plus he is in an Offensive Stance. The question only remains: can he reach the sniper before being gunned down?

Speaking of being gunned down, here you see a Red Claw Kratel Hacker complete with Link-Bot.

The Hacker thought he had secured the objective by hacking a data point giving him the Data Carrier state, but he was no match for our eagle eyed sniper who has already put a bullet between his eyes placing him in the Down state and by proxy placing his Link-Bot in a Disabled state.

Which brings us nicely into the Objectives themselves! Be them Random Deployables, POIs, Drop Points or Data Points! All of these are captured in beautiful neon-effect Perspex!

Like I mentioned before, we were worried that our certain specific requirements would cause problems but as you can see everything has come out wonderfully with perfectly shaped counters and crystal-cut engravings.

You can expect to see all of these counters (and more with hope) at DaffCon this April!